Hi there! My name is Nana (And no, I’m not a grandmother, it’s just my name!) I was born in the mid 80’s in Denmark. My gender says female though my hobbies could suggest otherwise.
I’m also known by some as Cabanaboy – Which is my online nickname And also my logo on my gallery pictures (CB). I’ve chosen the name for my blog “Cabanaminis” as a mixture between my nickname and miniatures, since I don’t want to confuse people that I run a blog about Cabana boys (Male attendants).

As mentioned above, I run a webshop with my husband, the name of it is King Games – And it can be found here: www.KingGames.dk
I’ll be linking to products that we sell every now and then – Especially if it’s something that I highly recommend – But the purpose of this blog is not to advertise for the business. But since it’s also my standard work – It can be hard to separate the two, and it’s not my goal to do so.

I do plan to make a page here on the blog with different tools, brushes and paints that I recommend and that we also sell in the shop – But let’s see when I’ll get around to it :-)

I’ve created this blog because of my passion for painting, converting and collecting miniatures and terrain. In the galleries I showcase the things that I consider some of my best or most interesting pieces – Also things that I’m proud to own. Not all of the things are masterpieces, but I also put them up to inspire other hobbyists.

I started painting in 2010 after being introduced to roleplaying games with miniatures. The first thing I painted was a Warhammer Skaven miniature (That I still own!). Back then I used worn down brushes, only Games Workshop paints. The brushes and often thick paints combined with shaky hands and lack of techniques made it a bit difficult to paint (Just making white spots for eyes could take me several tries!)

About a year later I started to expand my horizon, try other paints and brushes and after that I really started to take an interest in the hobby.

I love to paint different models (mostly to the sweet tunes of Heavy Metal) and I generally have a hard time spending 30+ hours on one single project. Instead I try to paint as many different things that I can up to my standard and hopefully my techniques improve along the way (Luckily I can see that I’ve come a long way when I look at my skaven miniature that I painted in 2010)

Painted Miniatures and Terrain for Sale:

As I mention on the frontpage of this blog – I sell some of my projects, you can buy them here: King Games and read more about the Pre-Painted stuff right here – Most of the stuff I paint is usable for RPG scenery, heroes and NPCs. Much of the scenery and dungeon accessories are highly usable in combination with Dwarven Forge and Thomarillion’s Dunkelstadt products or just to place on the gaming table.

I almost only paint things related to fantasy settings as I’m not a huge sci-fi fan (Though I do like Steampunk and Lovecraft). But who knows, I might start painting up some space marines some day. 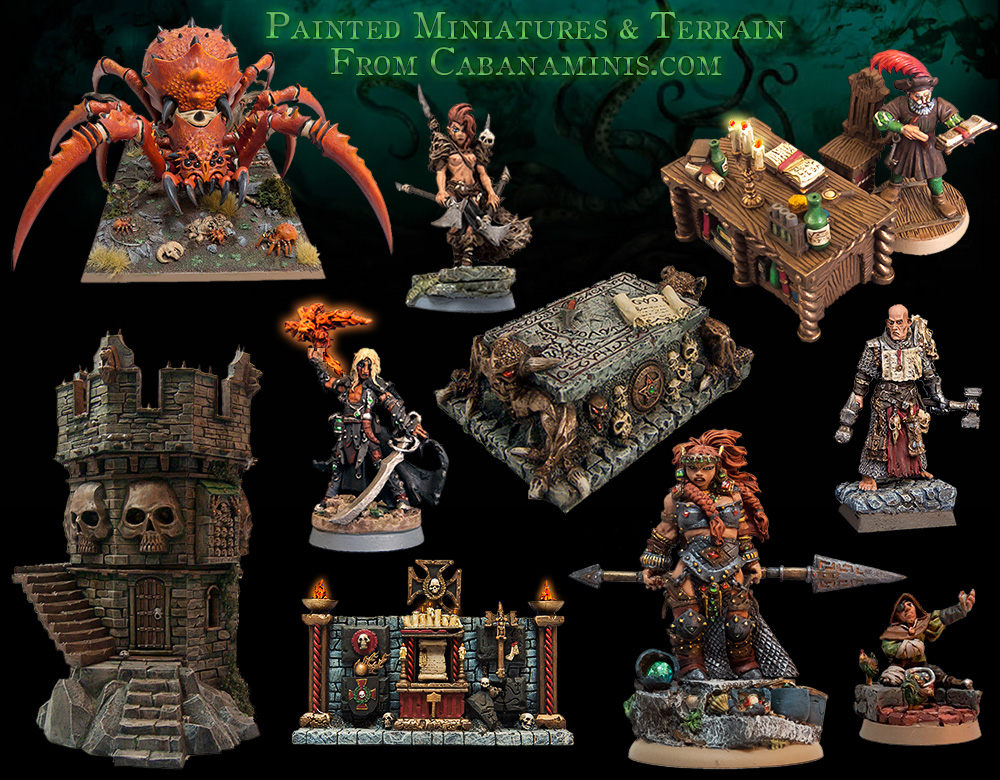 I love playing RPGs, I’ve tried Dungeons and Dragons and Pathfinder, but my absolute favourite is Warhammer Fantasy Roleplay. The Warhammer world/setting is just amazing; I love the combination of the very dark / dangerous, low fantasy setting combined with twisted humour.

I’m currently playing Warhammer Fantasy Roleplay (WFRP) I guess it’s “4th Edition” :-P since it is an entirely new rule system written by me and my husband with an (almost) complete rulebook. Completely unofficial of course but it works with our RPG group since we liked certain aspects of 3rd Edition, but the amount of clutter and messy/random dice system that seemed all too incomplete, made it difficult to stick to the rules, which prompted us to make our own. Including adding the d20.
We took the best parts of D&D and WRFP  – in our oppinions :) and yes, the work involved around making a new ruleset is immense! I could probably paint half of Tabletop World’s catalogue in the same amount of time (not even kidding!)

Compared to D&D and Pathfinder my group has found WFRP to be much more centered around investigating/politics/intrigues etc. – Though this is of course possible in most games, it’s just that the other games seem to have a much higher focus on combat and you can easily just start focusing on that automatically. Our game has a satisfying amount of each.

I’ve heard a bit about Vampire Wars and have considered that as well – Another option is Call of Cthulhu – But that probably won’t be until my group has had enough of Warhammer.

I also enjoy playing board games, mostly more advanced and theme heavy games. If there’s miniatures involved it’s even better! I’m always looking for more stuff to paint. I currently play a lot of  Pathfinder Adventure Card Game, (waiting for “season 4” Mummy’s Mask to release final products of the Campaign), Zombicide Black Plague and Eldritch Horror.
Other games I frequently play and enjoy are Arkham Horror, Mansions of Madness (2nd Edtion is awesome!), The Witcher Boardgame, Elder Sign and Lord of the Rings LCG. I just bought the new Arkham Horror Card Game which I am really excited about!

I also play a lot of  Mordheim. My first warband was Witch Hunters since I liked the miniatures. I then got addicted to collecting the entire range, which is a bit costly obviously! I now play Possessed Warband against my Husband’s Orc Warband and our Mordheim group consisting of a Skaven player, various Human Mercenary players and the occasional Dwarf Warband. It’s hard to fathom how our livingroom can possibly contain so many players and terrain at the same time, but we make it work :-P

I think that covers most of it – You’re welcome to write a mail to me about my blog or questions regarding Pre-Painted miniatures – I may not answer right away as I’m always busy painting, but I will write back as fast as possible. pre-painted @ kinggames . dk – Combine the stuff and you’re ready to write to me! (The mail is directly to me)