This page contains all the miniatures I have painted so far for Zombicide: Black Plague, which is the classic Zombicide game, though set in the medieval times instead of the original present time period.
I pledged the Knight level which consists of more than 50 Survivor miniatures and around 150 monsters, so it is quite a handful. I have divided the many posts into Categories which you can browse below! 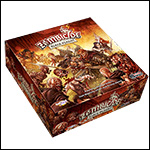 My first page/post about Zombicide: Black Plague, it includes painted pictures of all the Zombies & Heroes from the core game! 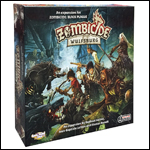 Pretty cool set, and it comes with some very nice heroes and cool Zombie Wolfz + Wolf-Bomination. 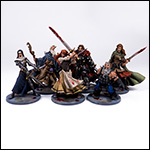 Heroes from the Core Game 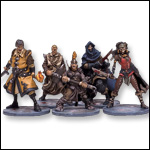 I painted up the 5 Survivors from the Hero Box #1 – Arnaud, Tucker, Glynda, Julian and Sylvia. 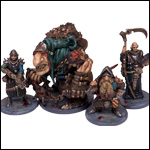 The four heroes from the Special Guest Box: Paul Bonner. The heroes:  Genevieve, Klom, Lord Bazak and Mizar all painted up!

Here is the final Special Guest box from the Kickstarter Knight pledge. This one includes miniatures based on artwork from artist Marc Simonetti. Cadence, Lady Grimm, Redcap Rodney and Antha! 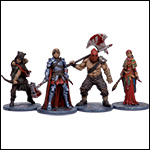 The four heroes from the Special Guest Box: Paul Bonner. The heroes:  Genevieve, Klom, Lord Bazak and Mizar all painted up! 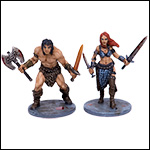 Woohoo! Now is the time to show off some of all my painted Kickstarter Exclusive minis. The first ones to go are the two Barbarian survivors which are clearly based on Conan and Red Sonja. 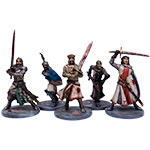 Here are the obvious Monty Python inspired survivors from the Zombicide: Black Plague – Kickstarter Exclusive box. I used both the artwork from their character cards and photos from “Monty Python and the Holy Grail” to make up the colour for their armor and tabards. 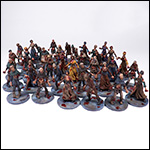 Zombies from the Core Game

Walkers, Runners & Fatties. Delicious zombies from the Zombicide Black Plague Core Game. Fully painted, and yes it did take a while ;-) 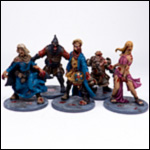 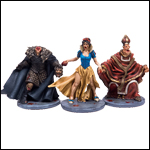 These NPC zombies were only available during their Kickstarter (most of their Kickstarter Exclusives would probably have some sorts of copyright issues if released through retailers, as loads of TV and movie references occur!) 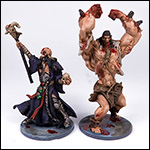 In my Zombicide – Black Plague Core Game post, you can see pictures of the original Abomination & Necromancer. 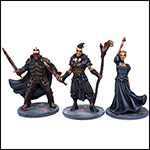 Here we have the 3 exclusive Necromancers which were only available during the Kickstarter. Most of the exclusive miniatures have some sort of connection to movies, books, comics and TV.

Click here to see all  posts related to Zombicide here on the blog.