Been on the hunt for the Warhammer Fantasy Empire Land Ship (Marienburg Class Land Battle Ship) from Forge World for quite some time, and today my hunt was over! Just checked and all the pieces are accounted for! In my excitement, however, I actually broke one of the chains holding the wheels… Big embarrassment at home! But nothing a bit of super glue can’t fix!
The amount of details are stunning, and luckily the one I bought was well glued and only with a thin amount of paint on it. It’s going to look amazing in my collection!

Haven’t decided whether or not I am going to glue all the miniatures to the ship, but I probably end up doing so. They are highly detailed and I’m looking forward to painting them.I still have a lot of projects going on at the moment, though. But the thing was really a bargain :D 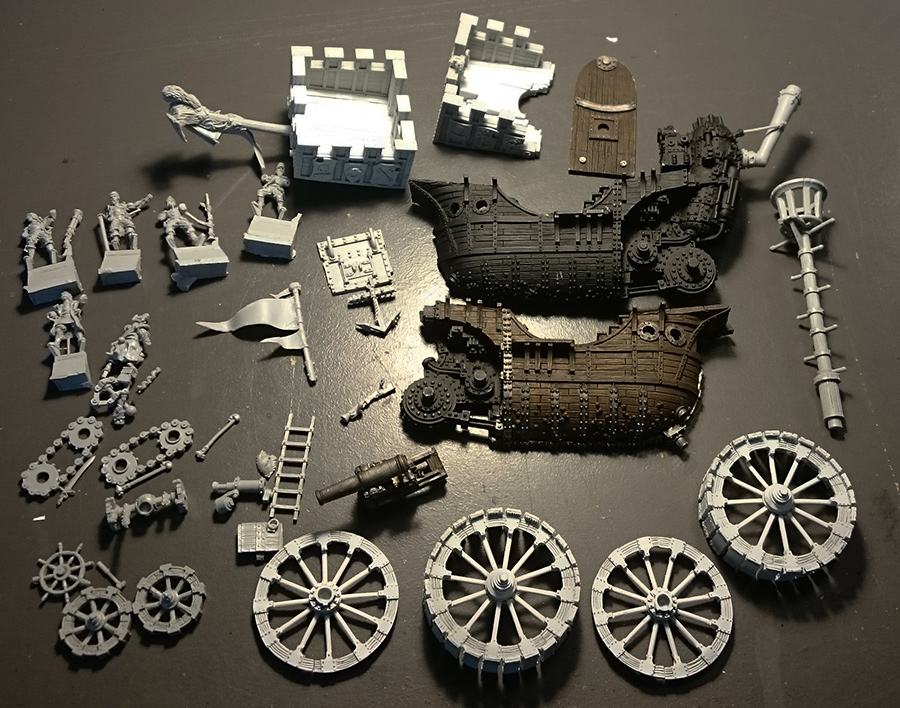 A bunch of fluff and rules for the Forge World Marienburg Landship was released in a Warhammer Fantasy book “Tamurkhan: The Throne of Chaos”, published by Forge World in 2011. I’ve summarized some of the fluff and included a picture from the Tamurkhan book below (Thank god I have that book on my shelf, it’s so awesome!)

Fluff about the Landship

Trimmed down to avoid a wall of text, hope it makes sense!

The genius behind the Steam Tank is all but unreplicable at any rate, and such secrets as known by the Imperial Engineers guarded upon pain of death. So, in recent years, with ever increasing threats to their city-state growing all around them, the guild-masters of Marienburg sought to do what they had always done and spend their way out of the problem, and as they could not buy a Steam Tank, they would commission something better!

To a cabal of engineers at the Imperial Gunnery School of Nuln however the proposition and the vast sums of money offered proved irresistible, and with the Countess Emmanuelle’s tacit approval (and no doubt reasons of her own beyond a cut of the price), they entered into a secret bargain with the Marienburgers to build them ‘Steam Tanks’ of their own. There was one problem with this… They didn’t know how to.

There were countless disasters at the prototype stage and the whole project became known as the “coffin filler” by the young apprentices attached to it in dread.
It was then that one of the more unstable of the Gunnery School Engineers, a man named Hezekiak Guttmann(known less than affectionately as the ‘burnt scarecrow’ to his fellows), had an epiphany. If they could not construct a small, powerful boiler such as the Steam Tank had, why bother? Why not use a larger, cruder one instead and the machine could be scaled up accordingly, and conversely the cannon could be made smaller, and as for the rest of the demands, they would appeal to the Marienburgers’ vanity – the machine would take the shape of a boat (or as it transpired at least a caricature of a boat), after all, they liked boats did they not?

The end product looked more like a grotesquely-sized theatrical prop than either a ship of war or a Steam Tank, and was a pretty shameful imitation of either, but somehow it worked – well mostly! The provost-marshal of the Imperial Gunnery School proclaimed them “The Wonder of the Age” upon announcing their success to the Countess Emmanuelle and the Marienburg legation, and even managed to keep a straight face while doing so. The Engineers’ relief at the acceptance of the design turned to something resembling panic however when the Marienburgers ordered not one or two, but a squadron of ten, and the functioning prototype proved less than easy to successfully replicate and the project continued to ‘fill coffins’ apace.

I’ll continue to update the page once I have continued painting “The Wonder of the Age” ;-)

Already put more than 50 hours into the ship and it is far from finished! The result so far however is stunning!

I recently bought a plinth for the Ship, but I don’t want to glue it together since I want to use the Ship for my Warhammer Fantasy Roleplay Sessions! 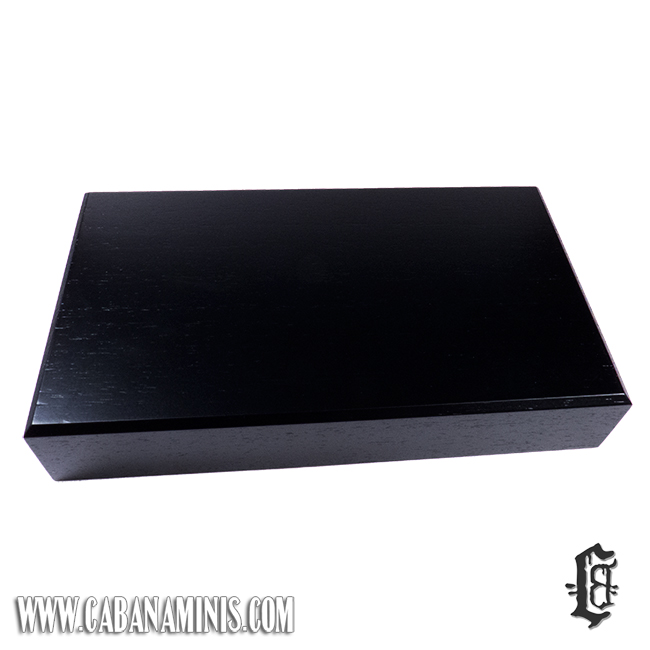 And here it is with what little of the ship I have completed! The missing parts are almost fully painted but I am missing the shield crests as I haven’t finished the colours yet. Oh, and obviously the mast and 7 crew members whose uniform colours I am breaking my brain over! The ship looks a little small for the plinth, but the sides and front (including figurehead) is yet to be attached :) 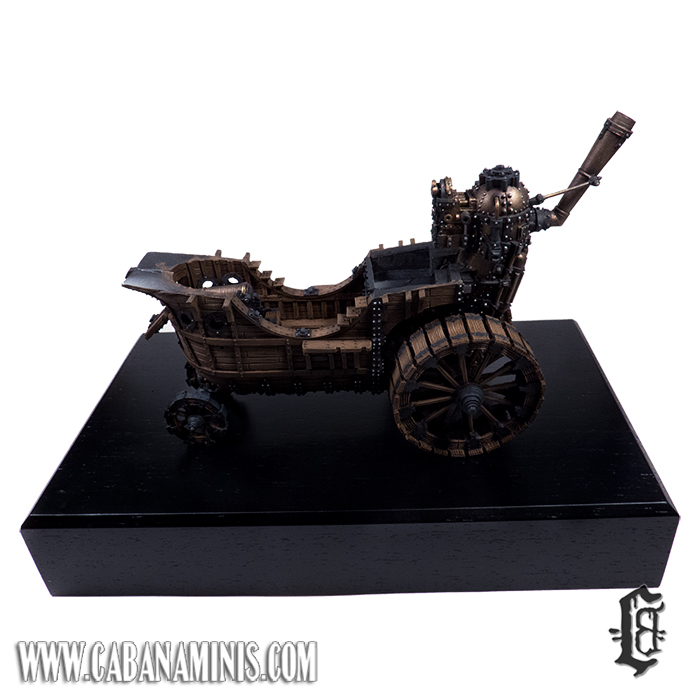 The wheels were excruciating to paint and I really wish I had an airbrush for it! I really wanted the ship a bit toned down, so no shiny metal parts on the wheels. I used black and blue/grey highlights instead. Let’s see how that works out :-)