This one is my painted version of the Npc-1 box included in the Kickstarter which you can buy separately pretty soon. 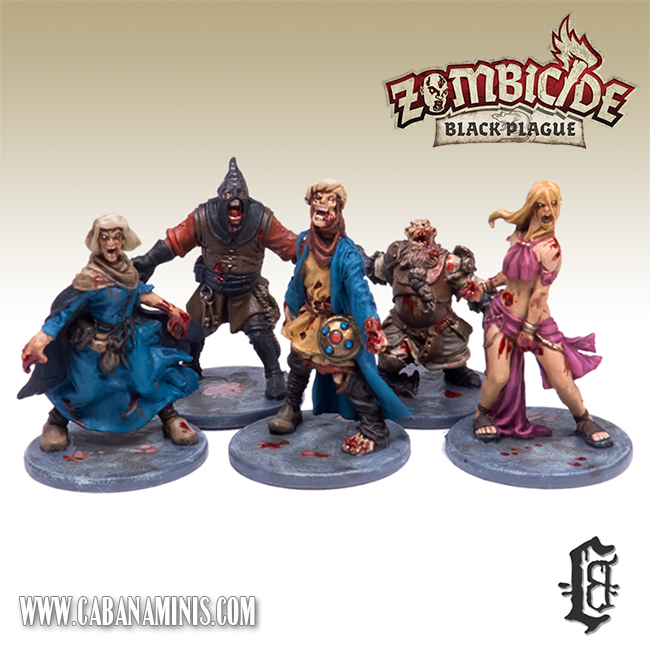 This set includes 20 miniatures: 5 different and 4 of each :-) from left to right we have the Dutch Woman (with clogs of course. She is described officially as a nurse though), the Executioner/Jailor , the medieval Middle-Eastern dude (Moor), Dwarf gone wild, and the oh-so charming Belly Dancer.

The Npc’s are different from other Zombies as they have their own category and spawn cards. However, when you run out of Npc miniatures, you pick from the Walker miniatures and they both have the highest killing priority.

The set also includes 3 Vault cards which was highly needed in my opinion. The reason they are included is because Npc’s are Collectibles in Zombicide. Kill and Collect 5 different Npc’s and you get a Vault card. Since we also have the 3 different Kickstarter Exclusive Npc’s we thought it was a bit of an overkill, so we don’t use the collector method. Instead we think the whole overrun by Walkers scenario is a lot more fun :-P

Oh, by the way. Npc does not stand for Non-playing-character as it does in most Rpg’s, but rather Notorious Plagued Characters (such as Eddard Stark from the Kickstarter Exclusives, but we’ll get to that :-)