The Santa Claus miniature for me and my husband’s Christmas Diorama has been picked and painted! Read more about the full project here!

Christmas is slowly approaching, which means that it’s time for yet another Christmas Diorama. Last year my husband put together a small outdoor Christmas Diorama, which I painted.
We decided to do another one again this year, but this time it’ll be a bit more complex. You can follow the progress of the Christmas Diorama in the Projects Section or by clicking here.

The scene/story is set in Santa Claus’ home, where a young Mrs. Clause has brought her hot friend over, where together they’ll  surprise Santa Claus when he returns home after a long day of work delivering presents.

So the very first thing was to start building a floor and some walls. We cut out some styrofoam to use as walls and used some cardboard (Was actually a component from a board game) for the bottom. Below you can see the very first picture of the project, after 1 layer of plaster on the styrofoam walls. 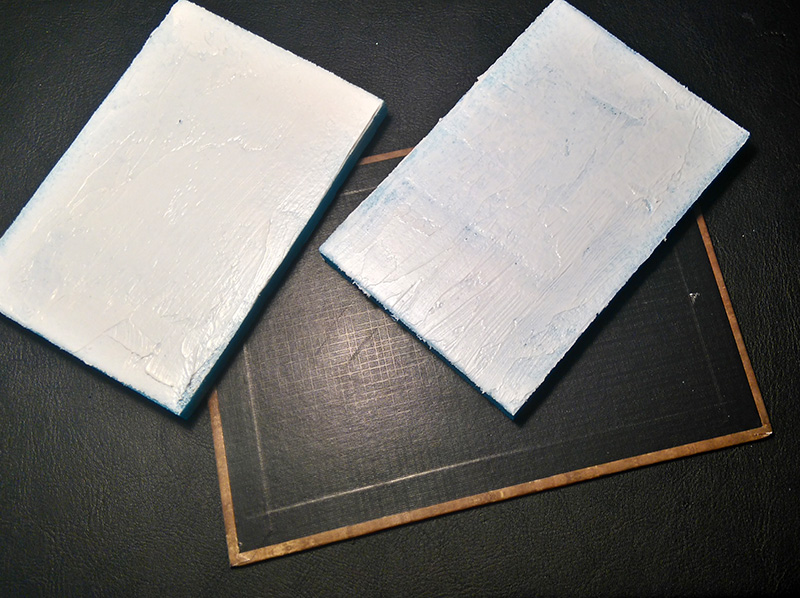 We decided to use The Medieval Fireplace from Fenryll as the primary furniture in the diorama, setting up the scene around the large fireplace. As Mrs. Clause we’ll be using Mrs. Clause and Schnauzers from Dark Sword Miniatures and as Mrs. Clause’s naughty friend – Christmas Sophie 2009 from Reaper Miniatures without her wings!

The next picture shows the walls glued onto the bottom and two wooden sticks added to the top. Sophie is resting by the fireplace inside. 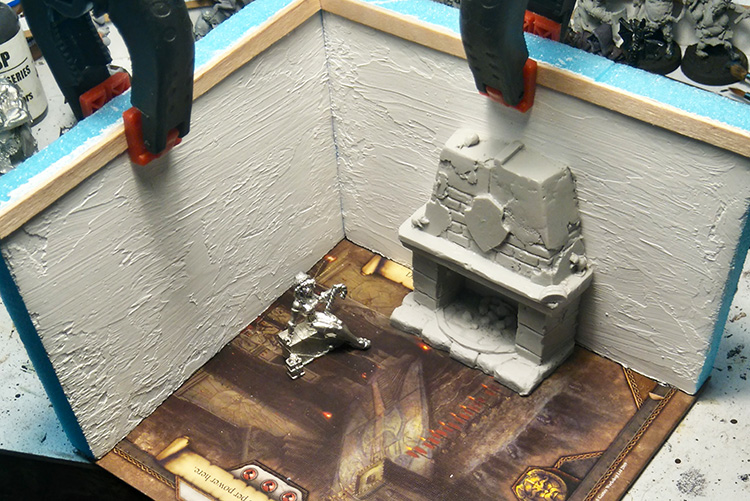 I recently painted 5 Orcs for my husband’s Mordheim Warband. He needed some Ranged Orcs for his Warband (+1 Ballistic Skill for a group, might as well use it). Having found 4 “Ruglud’s Armoured Orcs” on Ebay not long ago, we figured that these would be perfect for the job, even though they’ll be using bows in the actual warband. The 4 Ruglud’s Armoured Orcs can be seen below: 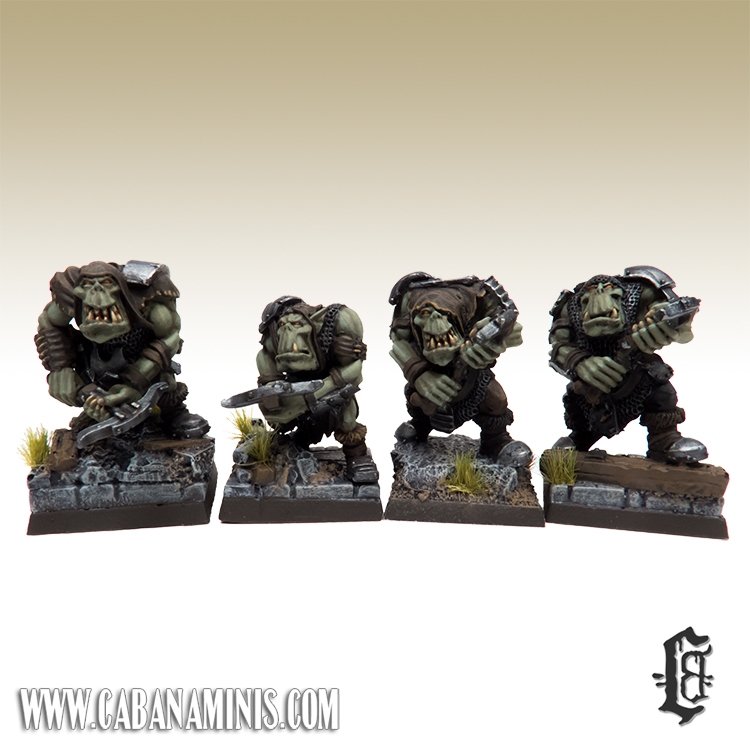 Nicki (my husband) wanted one more orc for the group and decided to convert one using Orc bits from Spellcrow and an old plastic orc (From the Warhammer Fantasy 6th Edition Core Set). The result ended up pretty funny with the orc having poked out his eye and is now attempting to clean his teeth with an arrow.

The entire group can be seen below, you can also read some fluff that Nicki wrote about the orcs on his Mordheim Orc Warband page. 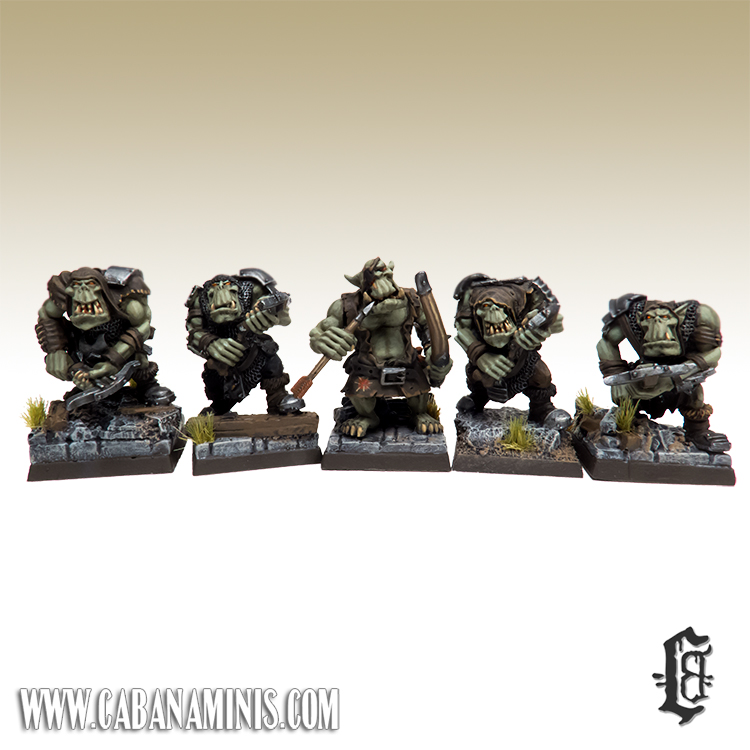 I have been painting all kinds of outdoors beasts and monsters, which will be part of our newly begun adventure campaign, that takes place outside of Middenheim. As our heroes are escorted by an accountant on her way to Dorfmark (City in Nordland), we are quickly thrown into a political scandal involving a suspicious Burgomeister and numerous raids on local lumber mills. The raiders are humans, but something sinister lurks in the shadows and the beasts are on the prowl in the Forest of Shadows. Several twists have already taken place (despite only 2 sessions!) so I have been busy painting all kinds of beasts for the sessions (as I don’t know for sure which ones will be used as I am not the GM)

Here are some of the larger Centaur creatures of the Beastmen Herd: Centigors 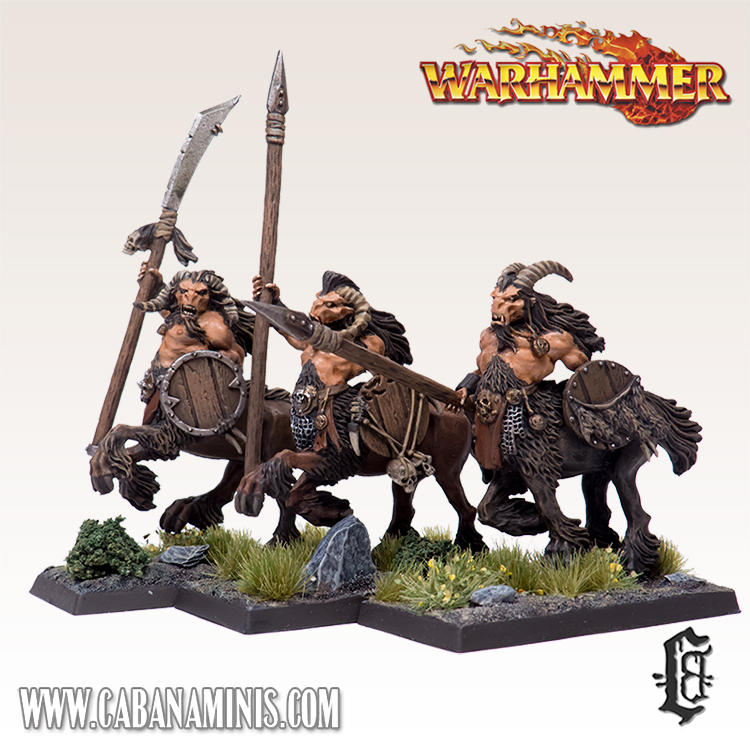 I had fun painting these and I went through a lot finding them in good condition and of course in metal, but I ended up with a bargain on Ebay, so everything went smooth in the end. I actually have 2 spare ones as I ended up purchasing a whole set in its original box. As these are heavier than they look, there was no way I could mount them on top of scenic bases, so I had to make my own using very fine sand, rocks and foliage. My husband is the base master, so I let him decorate them. I asked for a forest look in mainly green colours and I got exactly what I wanted.

Here are a few more pictures of these cool creatures:

I painted them in different colours, as I spent some time experimenting (as usual) I like the “Ginger” one best, that’s the one in the middle. I also experimented on their horns. It worked better on some than others, but from a distance it looks awesome and they look very frightening on a gaming board with forest scenery!

Oh and the original metal figures had ridiculously small shield attached, so I filed/cut them off and put on shields from the Ungor sprue, and it really helped the overall look. 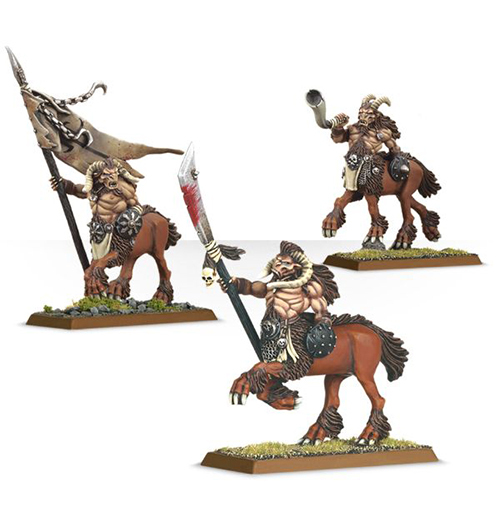 As I mentioned in my Notice Board post, I also made an advertising pillar using a lot of posters either found online or self-made. The Advertising pillar is from Thomarillion and it has a really good size with loads of space for posters. 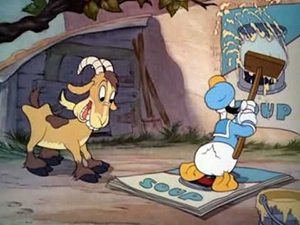 I used Vallejo Satin Varnish on both sides of the paper posters like old time posters! Though a lot more succesful than Donald Duck’s attempt with soup can advertisements!
I simply added layer after layer of small posters, and I’m pretty sure there are shortcuts to this such as full printed sides, but this just gives it such an authentic look!
I actually made two of these as one of them was for my pre-painted section a while ago. It sold the same day :-)

It looks great on our Mordheim table as a terrain piece!

Here is the Pillar shown from one its sides :-) 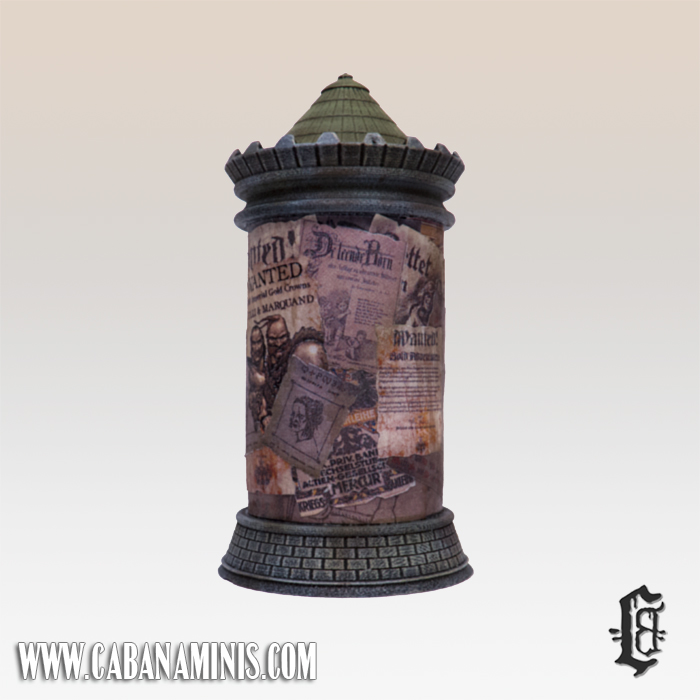 Most of the posters on this side of the pillar is made up of posters from the internet and our cool Ulli & Marquand Wanted posters. The wanted poster is Geralt of Rivia from the Witcher 2: Assassins of Kings!

I made a link in another post with some of the cool posters I used for my Notice Board Poster. Check it out :-)

I’ve received several mails and comments about the posters I used for the Message/ Notice Board, and I have made a PDF file with all the posters in various shapes and colour shades. Sometimes it just fits better with a pale neutral poster when I put them on buildings and such :)

Here is one we used as hand-outs for our RPG sessions. My husband is the GM and made the poster from an old softcover book.
We originally intended to use it for the old collector miniature Ulli & Marquand’s Wanted Poster Sign, but we ended up with another idea. Reminds me that I need to get that up on the blog some time :-P 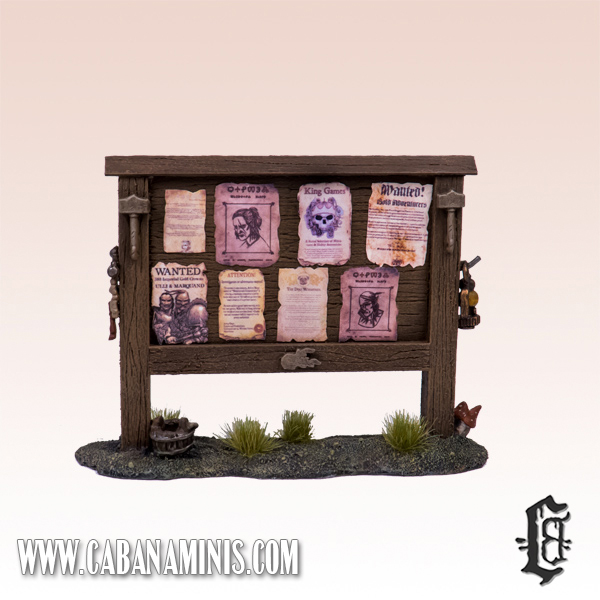 I used a small decal scissors for the cut-outs and something called Alles-kleber (which I assume is normal hobby glue) and very carefully glued the posters on the wooden frame :-)

Another piece done for my project “The Dead” which basically includes corpses, casualties etc.

This time it’s a converted piece called “The Hanged Man”, I used a pole from The Hobbit terrain piece “Goblin Town”. I then added a Games Workshop zombie hanging from a rope, a kind note from the Witch Hunters who hunted this heretic down, a crow eating a piece of rotting flesh from the ground and that’s more or less it.

The result ended up being an excellent terrain piece that can be used for many settings.