I finished the other half of a large commission and I had a ton of fun painting all the quirky ghosts, heroes and skeletons! There a many conversions amongst the pieces and a few surprises to paint :)

It was a fun commission and it is always nice to paint something converted and unique :)

We decided to wait with Warhammer Fantasy Roleplay 4th edition until the Starter Set is released (about 6 months+ delayed so far), so until then we are trying out 5th edition of Dungeons and Dragons. We played D&D 4th edition 5 years ago for 1½ years or so, before we went back to WFRP and our homebrewed ruleset!

So until we get the starter set and the next campaign book, which is probably another version of Enemy Within by Graeme Davis, we will settle for D&D! Which means a lot of new miniatures both monsters and humanoid races and creatures.

Our current campaign is Curse of Strahd, which has pretty good reviews and we are really enjoying it so far!

We needed some new heroes for the campaign and as a sharp contrast to WFRP which is pretty low fantasy, we decided to go for some high fantasy heroes. We love them so far!

We went with a good classic setup: A rogue, a wizard and a Ranger (melee version)

From left to right: Varg – Half-Orc Ranger, Rook – Tiefling and Magnus – Wizard of the Conjuring school with his familiar – the owl Percy

I had a blast painting these, and finding miniatures proved to be a real challenge!
Varg, our Half-Orc miniature, is actually Valeros, a human fighter from Pathfinder. painted green with tusks!
Rook, our Tiefling, is the “Female Demonkin Warrior” from Dark Sword miniatures which we modified with daggers and a different pose.
Magnus, our human wizard, is the Luwin Phost, dungeon dweller from Reaper Miniatures. His owl familiar – Percy is from the Owl Basing Kit from HQresin.

My hero is Magnus! I always find it fun and challenging to play a much different character than the real me! And a 60 year old man with magical powers is quite the opposite of me :-D

Finally back in business after a nice long holiday and a huge workflow!

And our new webpage dedicated to Dunkeldorf is up at: www.dunkeldorf.eu. We are very proud of our project and hope you all like it too!

But now it’s time for the second painted miniature: Bertha the Ratcatcher! I have already shown the greenstuff version of her, and now she is all painted up. She is a gaunt and not very feminine character and one of my favourites! I present to you: Bertha!

At the moment, she is on her way to the caster and hopefully we’ll see some metal versions of her! I can’t even begin to describe the feeling when you finally produce something of your own, after having only sold other companies’ miniatures for so long!!
As I’m not the most talented miniature painter, I hope to someday see Bertha and the other miniatures painted up by a professional!

I’ve painted the Fenryll Butcher and Stall before, but I thought it was time for a new version! My husband modified the stalls and added a little roof (and added all kinds of meat on a string)
Previously the butcher was a separate miniature, but this time I attached the miniature to the stalls, since I don’t use the miniature outside the stall anyways.

The miniature was very fun to paint and ended up pretty macabre! I painted him in subtle colours, so the only real colour is the meat! (and blood) The idea of him having all kinds of meat which he finds in the gutters or roadkill is a very fun addition!

Here’s the model from different angles!

I thought it could be a good idea to show off the miniature before I painted it (but after it was primed), so here it is! 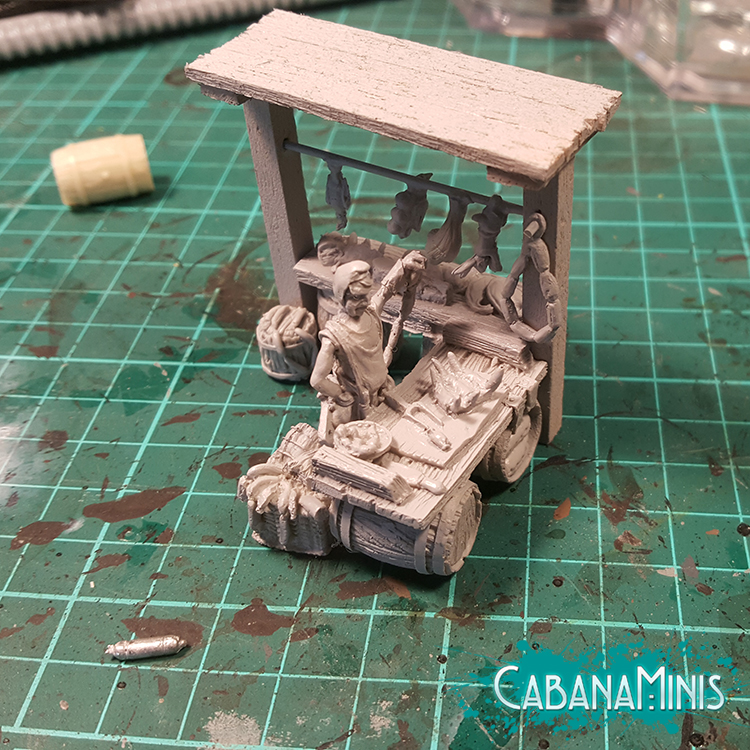 As the title says! Our first miniature in our Dunkeldorf Miniature line is finally painted and ready to show! I knew from the beginning that he would be so satisfying to paint and I proved myself right! I’m already thinking about what colours to paint him next time! 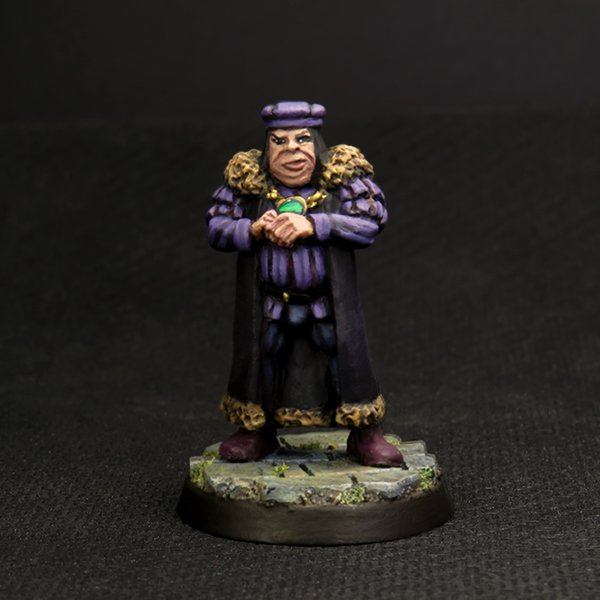 This is actually just a prototype as our Sculptor Sonny isn’t done making modifications, but any modification is just going to improve this already awesome miniature!
I wanted to paint him in warm skin colours, so I went with Tanned and Rosy skintones with purple shades. And of course purple clothes to show off his wealth! He is certainly plotting something sinister!

The miniature is painted with Reaper paints and I mainly used the following paints: 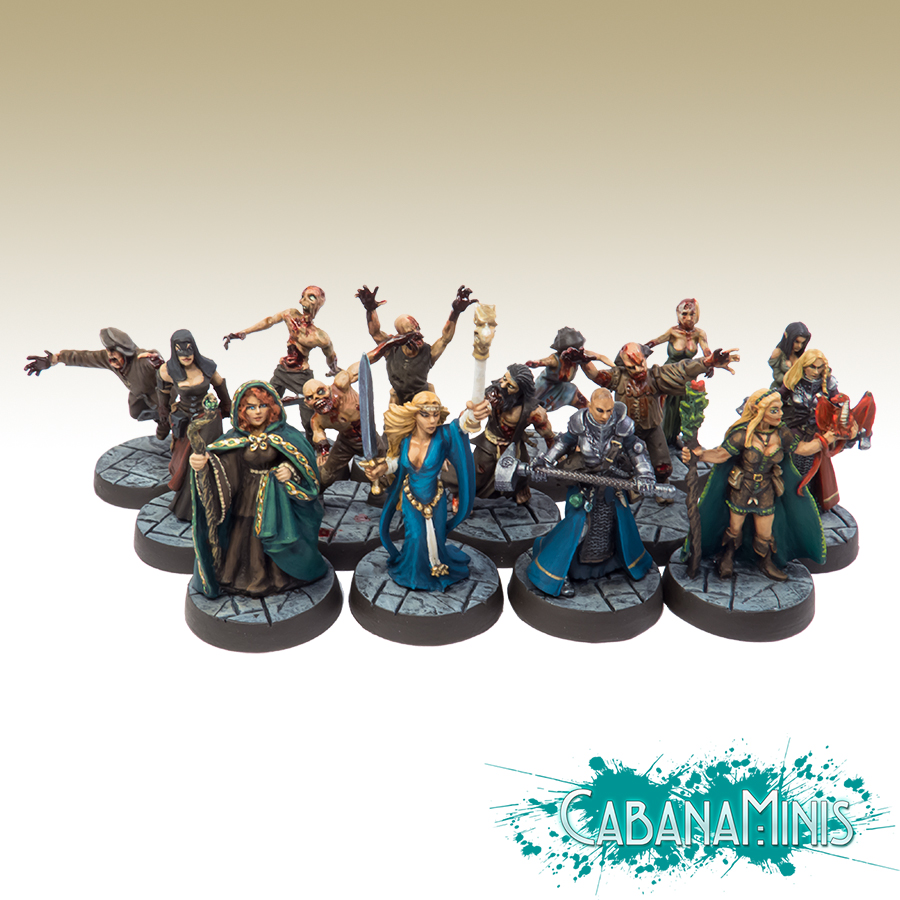 Phew, been a while since my last post. Out project and upcoming kickstarter Dunkeldorf Miniatures is really coming along well. All of the starting miniatures have been designed, so now we just need the finished artwork and of course the sculpts!

I am really excited to show off the artwork and greens of the following miniatures! All in 28mm scale:

First off: My favourite citizen of Dunkeldorf: Bertha the Ratcatcher!

We asked for a gaunt female ratcatcher who wasn’t too feminine and we got exactly that! Both Mustafa and Sonny did an awesome job drawing and sculpting her! Every miniature in our line has their own background story written by my husband and I. We really had fun creating these citizens and hope everyone likes them too!

You can read more about the individial characters here on our facebook page.

Second Miniature of the day: Herman Geizhals – Rich noble with a dark secret!

I already showed you the artwork of Herman a little while ago, and here he is in all his glory! 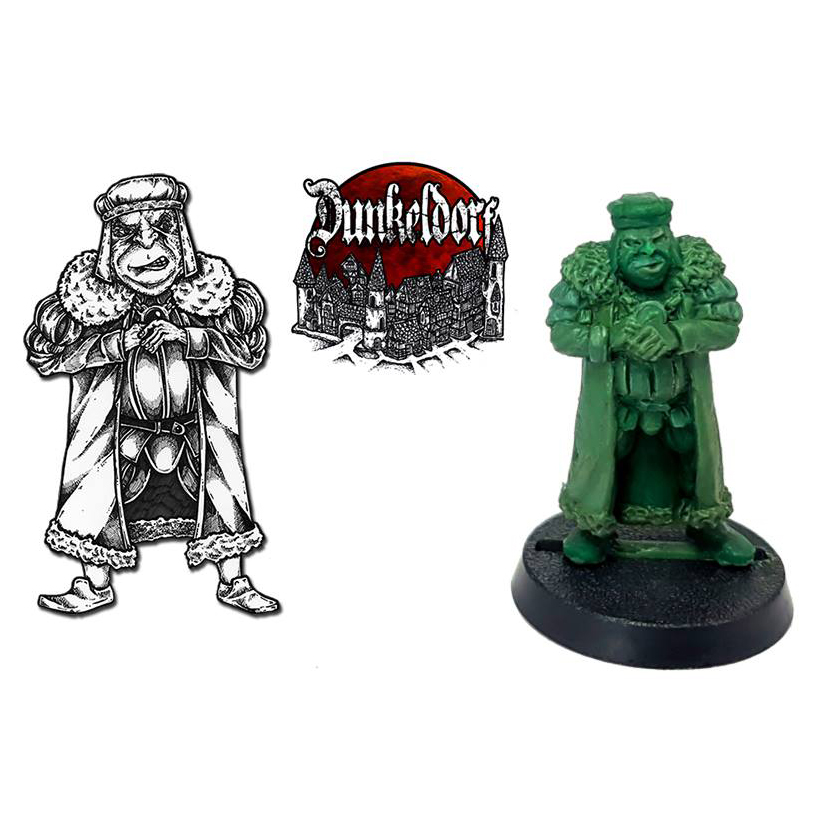 I have the greens on my paintstation and boy, they are so detailed! Pictures don’t even give them justice! We are so excited to do this project and can’t wait to show you what else we have in store!

Next time we have a beggar who was once one of the greatest flute players in the world! What happened to him is a mystery, but he is a strong contender to beat Bertha as my favourite miniature!

For many years my husband and I have had a dream of starting our own miniature line! And now we have finally taken the first steps towards that dream!

We are so excited and can’t wait to show everyone our miniature line!

The theme is townsfolk and the setting is Dunkeldorf, a fictional town (of course) which will be the centerpoint in the story we are going to tell. This project is not just miniatures, but also an RPG setting where we will be telling a story about the town and each character. We hope people will find inspiration in the miniatures and their background and maybe add them to their own roleplaying game!

Many of them are based on characters from our own RPG’s, and some of them has had recurring roles through the years!

The first one I will show off is Herman Geizhals, Burgomeister of Dunkeldorf! The first character we created! 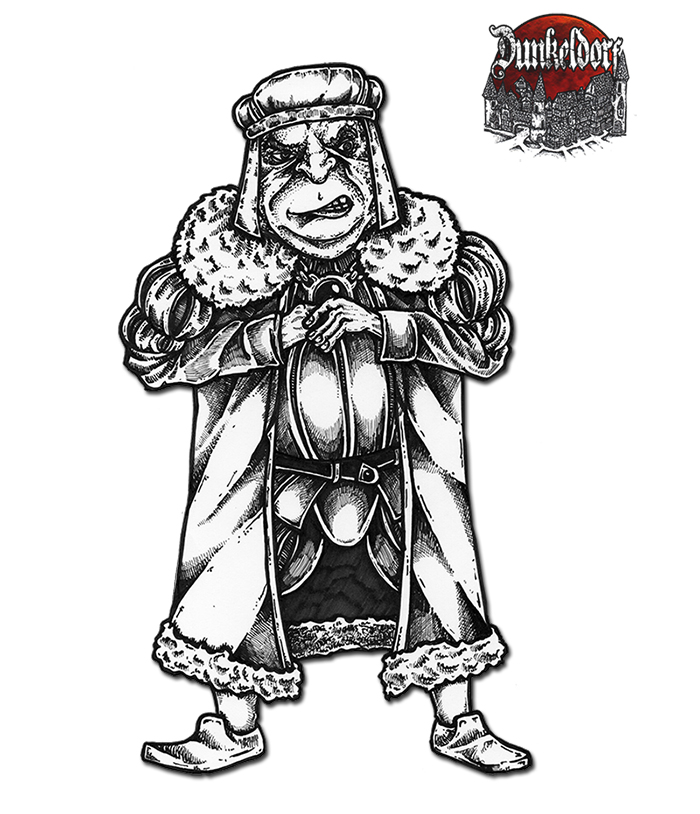 The artwork is created by the very talented Mustafa Bekir of Spevna Studio from Japan! He is creating all the art for the Kickstarter campaign, including the logo! Soon we will have pictures of the sculpt, which is now completed and looks absolutely beautiful! Can’t wait to show off the rest of the minis, but it will have to wait a little longer! :-D

A little while ago, I posted some pictured of my Red Dragon from Reaper (a big metal dragon) and I had to write a post about my green drake aswell!

This one is smaller and a lot more handy than the red one. It’s the Reaper Bones Temple Dragon! Even though the quality of Bones casts have improved greatly the last few years, they still have the habit of “crawling back from whence they came” even if using hot water! So this one had its tail underneath the base after assembling it. So I built a base using the Black Milliput, and I am seriously in love with this product! I usually use the yellow/grey version, but by God, the black stuff is good! Very smooth and so easy to work with!

However.. I suck at making bases, no matter the material, so I had my husband do the base vegetation and add a lot of plant growth on it, to make it shine! And I think it works! It is a forest dragon after all! 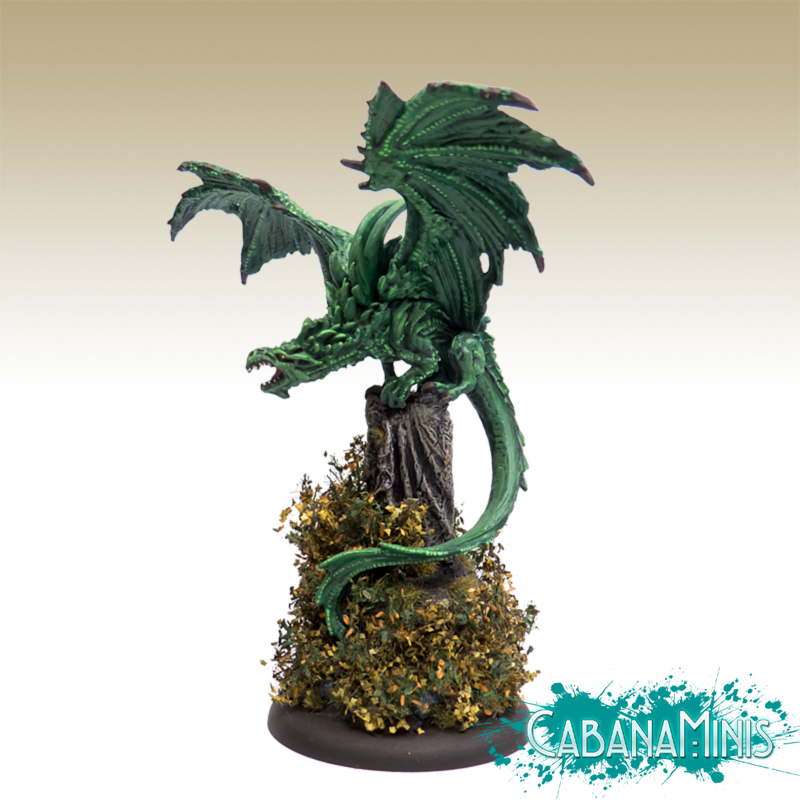 She (of course it’s a she!) is mounted on a 50mm round lipped base, so she is rather small compared to my Red Dragon (silver dragon from reaper), but really cool and fun to paint! I added tons of small dots to her wings and tail! Only negative thing about the sculpt is the tongue! Is it too large for her mouth or is she shaking her head and the mini is sculpted mid-twirl? Either way, she looks fearful and ready to eat any adventurer’s entering her part of the forest!